The average asking rent across the top 30 U.S. markets rested at $6.35 per square foot in September — 3.5% more year over year, but unchanged compared to the previous month. The highest rents and rent increases continue to be recorded in port markets. For instance, the average rent for industrial space in New Jersey saw the largest increase, of 6.4% over the past 12 months. The Inland Empire and Nashville followed close behind with year-over-year increases of 6.1% and 6%, respectively.

In terms of premiums, our analysis found that new leases in New Jersey cost, on average, $2.60 more per square foot than in-place leases. Boston followed closely with lease spreads of $2.53 per square foot.

Read to the end and download the full October 2021 report for updated lease rate and vacancy stats for all major U.S. markets.

As the easing of supply chain bottlenecks continues to be slow, the availability of industrial space in port markets, as well as supporting regional logistic hubs remained significantly low. Sluggish shipment transit continues to see the Inland Empire posting minuscule vacancy rates — 1.1% in September. Though not a port market itself, this sizeable regional distribution hub takes on a significant portion of the shipping volume received from both Los Angeles and Long Beach ports.

Similarly, storage and distribution demand spilling outside intake markets has driven vacancy down considerably across several other landlocked hubs. For instance, industrial vacancy in Indianapolis hit 2.3% last month, while Columbus was at 2.4%, and Kansas City industrial real estate recorded an average vacancy of 3.4%.

Transaction activity during the first three quarters of the year resulted in a total of $41.7 billion in industrial sales.

The under construction pipeline increased more than seven million square feet through September across the industrial markets analyzed for this report. At the close of last month, under construction projects together with planned developments totaled 6.3% of stock.

Download the complete October 2021 report for a full picture on how U.S. industrial markets fared in the first nine months of the year, including insights on industry and economic recovery fundamentals. 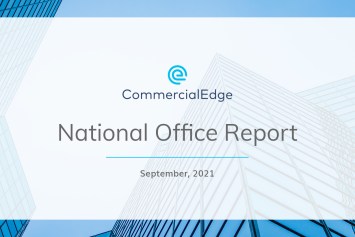 Office rents and vacancies remained stable through February as the construction pipeline continued to contract.

For Brokerages, For Brokers, How To, Industrial

With such tight competition driving the industrial sector, listings should be promoted with a well-established marketing strategy in place.