The rush for industrial space in 2020 will likely continue through 2021. And demand for more industrial space — fueled by rebounding global trade and economic recovery — will be augmented by federal economic incentives. Plus, the Fed projects a 6% growth in the gross domestic product (GDP) this year after the passage of the $1.9 trillion economic stimulus bill that promises to boost the economy.

All of these factors have contributed to the increases of rental prices, sales activity, and new construction in the industrial asset class. But, the rise of e-commerce, in particular, continues to fuel demand for industrial space. And, as the pandemic drove consumer shopping to the online medium, the increasing need for warehouses and storage facilities contributed significantly to increasing sale prices. In fact, sales grew 32% over the previous year.

Specifically, our report recorded $4.7 billion in sales nationwide during the first two months of 2021. And, by February, the average price per square foot had risen 10% from Q4 2020 to $112 per square foot.

In coastal markets, high demand and insufficient space for new developments spurred price growth, and New Jersey’s steep average of $292 per square foot is just one example of high prices in port markets. Without discounting the market’s unique asset mix, this impressive sales volume was largely due to two high-profile cases: Amazon leased a 900,000-square-foot building that recently sold for $247 million, and a FedEx Freight building sold for $120 million.

Likewise, price growth in the face of inadequate space was a pre-pandemic trend that continued through 2020. For instance, across California’s three port markets, the average price per square foot increased by more than 40% between 2016 and 2020. During that time, prices in Orange County grew from an average of $158 per square foot to $226; Los Angeles saw an increase from $138 to $197; and Inland Empire prices rose from $80 to $127 per square foot. On the other side of the country, the East Coast saw sale prices in New Jersey grow by 75.4%, in addition to an astronomical 154.5% in Boston.

However, port markets witnessed the sharpest growth in industrial rents in the last 12 months. Specifically, rents rose 9.2% in the Inland Empire, 8.1% in South Carolina and 7.8% in Los Angeles. Port markets also had the widest spreads between average rental rates and rates for leases signed during the last 12 months. For example, New Jersey, Seattle, Los Angeles and the Inland Empire saw lease spreads of between $1.51 and $2.62 per square foot.

By contrast, markets in the Midwest saw the lowest rent increases: St. Louis rents grew by a nationwide year-over-year (Y-o-Y) low of 0.3%, followed by Kansas City at 1.7%, Houston at 1.8% and the Twin Cities at 2.4%. Even investor favorites Denver and Dallas experienced only modest year-over-year premiums of $0.59 and $0.62, respectively, while Phoenix saw a decrease of $0.28. At the same time, Chicago saw a more notable spread, as new leases here increased by $1.09 Y-o-Y per square foot.

Meanwhile, as of February, the national vacancy rate was 6.1%. However, in coastal markets — where demand for industrial space is high and space for new development is scarce — vacancy rates were far lower. Notably, the Inland Empire, Orange County, New Jersey, and Los Angeles saw vacancy rates of 2.5%, 3.6%, 3.9% and 4.4%, respectively.

While rental and sale prices in inland markets paled in comparison to coastal markets, construction boomed in inland markets, where land is more amply available. More precisely, Phoenix, Dallas and Denver together accounted for 17% (55 million square feet) of all new development in the U.S. What’s more, there are 59.7 million square feet of new projects in the planning stages across these same markets. The inland appeal to developers is their ideal location for logistic and shipping hubs.

Due to the availability of space, much of this new stock is anticipated to be in inland markets. As of February 2021, Phoenix, Denver, and Dallas had 15 million, 12.7 million and 27.2 million square feet under construction, respectively. In contrast, space-constrained coastal markets have smaller pipelines. As of February, Orange County, Los Angeles, and New Jersey had 609,331 square feet, 5.7 million, and 8 million, respectively, under construction.

This national report looked at one year’s worth of data on the top 20 U.S. industrial markets with a focus on average rents; vacancies (including subleases but excluding owner-occupied properties); deals closed; pipeline yield; and forecasts, as well as the economic indicators most relevant to the performance of the industrial sector. Sales volume and price-per-square-foot calculations may not include portfolio transactions or those with unpublished dollar values.

Use the prompt below to download the full report for a comprehensive analysis of how the U.S. industrial markets fared by the third month of 2021, as well as insights on the recovery path ahead. 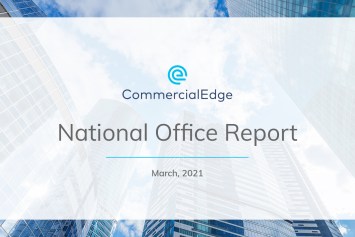 Despite rising vacancy, average office lease rates across the top 50 markets in the U.S. continue to follow an ascending trend.